The United States Kuo Shu Federation (USKSF; www.usksf.org) proudly hosted the 2009 U.S. International Kuo Shu (Kung Fu) Championship Tournament at the Marriott Hunt Valley Inn in Maryland, on July 24-26, 2009. This marks the 21th anniversary of this event that continues to attract the very best masters, judges, and competitors from around the globe.  The annual Kuo Shu Tournament (as it is commonly named) hosted approximately 440 competitors from more than 10 participating countries, including the United States, Canada, China, England, Nepal, Germany, France, Brazil, Spain, South Africa, Canada, and India, to name a few.  The tournament, sanctioned by The World Kuo Shu Federation (www.twksf.org), promotes friendship, unity, physical fitness, harmony, martial ethics, and peace around the world through martial arts.  This annual competition has become a staple event in Maryland and one of the most highly anticipated tournaments in the United States.

The Kuo Shu Tournament officially began on Saturday morning with Grandmaster Huang, Chien-Liang, President of the USKSF and 64th Generation Grandmaster of Tien Shan Pai, hosting Opening Ceremonies.  This year, VIP’s were escorted into the event by 2 pristine white lions from Grandmaster Augustine Ngu’s All Master’s Martial Arts Lion Dance team from Canada.  The national anthem was presented by the Color Guard from the U.S Customs and Boarder Protection Agency.  Many congressional, state, and local officials also continued their annual support with representatives from U.S. Senators Barbara Mikulski and Benjamin Cardin as well as Maryland Governor Martin O’Malley.  Once again, the Executive Office of the President was also represented at the Opening Ceremonies.  The USKSF sponsors the only tournament to have formal participation from The Office of the President of the United States since 1994, and current U.S. President Barak Obama continued that tradition.  In addition to the spectacular Lion Dancing, there was also a special Opening Ceremony Youth Demonstration.  The audience marveled to see traditional martial arts demonstrated by boys and girls ages 5 through 18.  It reminded us all that traditional Chinese Kuo Shu continues to be alive and well, propagating to the next generation

The competition events began after the opening ceremonies, with Adult and Youth Light Contact, Forms and Weapons, Wushu, and Taijiquan divisions. Elimination rounds for the Lei Tai Full Contact fights began in the afternoon in the main ballroom, as other events continued around them.  This year the competition was at a top level as participants were also vying for a place on the U.S. Lei Tai Team, which would attend the World Championships in Ulm, Germany in September 2009.  The Lei Tai finals resulted in several local and regional fighters becoming national champions and earning a place on the U.S. Team.

The Saturday evening Master’s Demonstration is always a highlight of the tournament.  This year was no different with some of the best masters from around the world demonstrating their skills.  This list included Masters Shangwei Wu, Calvin Chin, Liu, Xiao-Ling, John Ozuna, and Zhi Su Li to name a few.  Additionally, 2009 Kuo Shu Federation Ranking Certifications and Support awards were presented on Saturday evening.  The U.S. Kuo Shu Federation (USKSF) continues to provide training and certifications for Lei Tai referees and forms and weapons judging.  This training typically takes place the week prior to the tournament event.  The USKSF also provides multiple levels of instructor certifications and individual rankings.

The weekend came to a close with the Annual “Kuo Shu Hall of Fame Banquet”. This banquet brings together competitors, judges and other officials in a celebration of martial unity and friendship.  This year, Master Calvin Chin was honored with an induction into the Kuo Shu Hall of Fame.  Master Chin and his students have been regular supporters of the Kuo Shu Tournament for years and have competed and judged at the highest levels.  Master Chin now joins a select cast of the world’s greatest Kuo Shu masters including, Steve L. Martin, Chan Pui, Wai Hong Eng, He Wei-Qi, Wai Lun Choi, Henry Look, Kevin Preston, Richard Lee, Joe Dunphy, Jiang Jing Sung Baek, and Huang Chien-Liang.  The “Judge of the Year” and “Competitor of the Year” awards were also presented with categories for Youth, Teen, Adult, Internal and Lei Tai, Male and Female competitors.

Throughout the weekend, tournament participants had the opportunity to compete in over 270 divisions as well as take on-site seminars from world-renowned masters.  In addition to the amazing competition, spectators are also treated to an assortment of goodies from the tournament vendor fair.  What’s your pleasure – jow, kung fu movies, weapons, tea pots, garments, even shiatsu massage can all be found at the Hunt Valley Marriott during the Kuo Shu weekend.  The annual US Kuo Shu Tournament demonstrates all that is worth celebrating in the practice of traditional and contemporary martial arts. The event emphasizes martial arts’ ability to unify people from all walks of life, and promote both a healthy body and moral character.  As a method of cultivating the mind and body, Kuo Shu appeals to persons of all ages and nationalities.  Mark your calendars for next year’s event, which will be hosted on the last weekend in July in Maryland.  For further tournament details, photos, results, and additional information on the United States Kuo Shu Federation (USKSF), visit www.usksf.org, call (443) 394-9200, or email info@usksf.org. 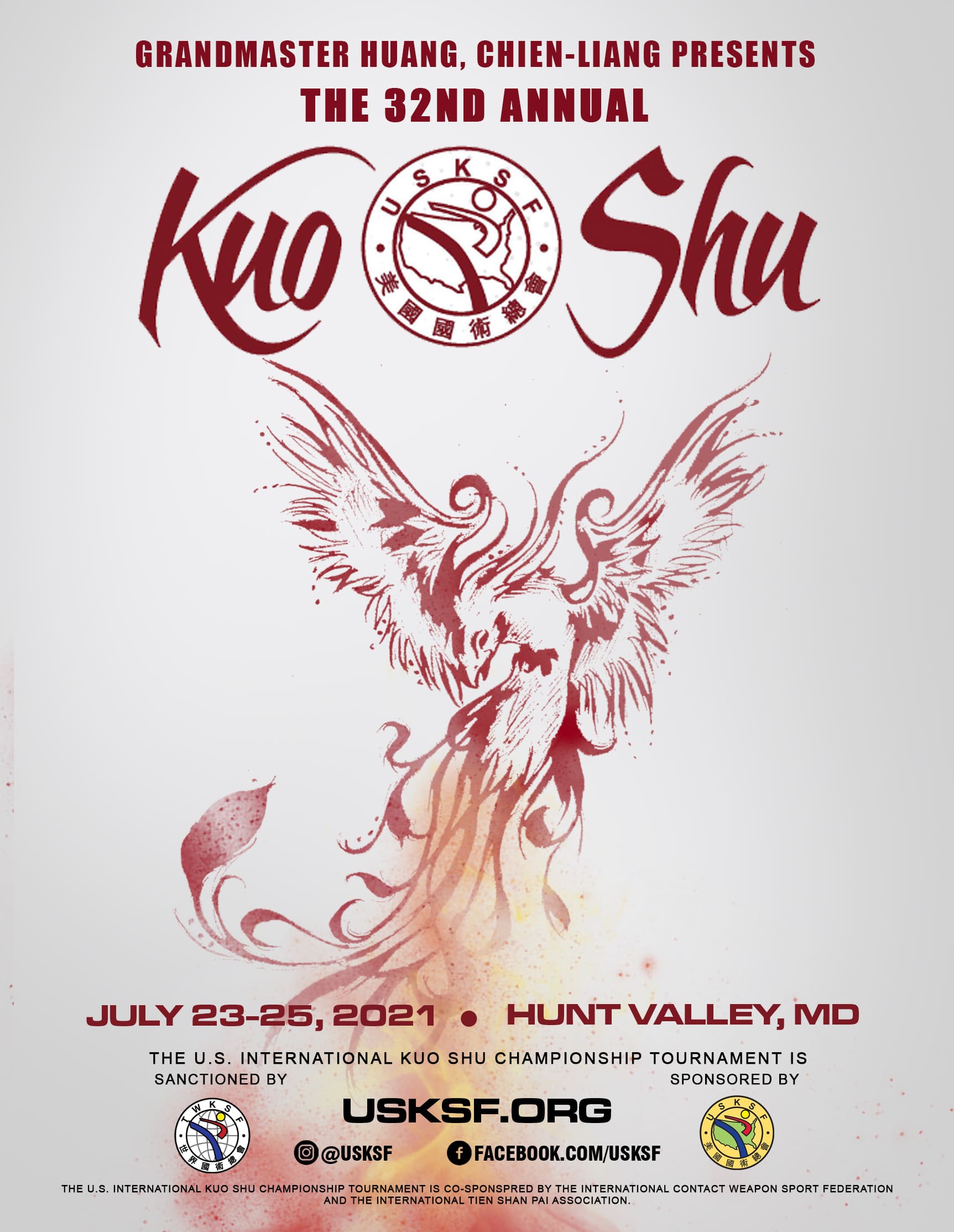